Follow this link to go straight to the COSMOS Manual for installation and tutorials.

In September 2010, HSFL began work on a 3 year NASA EPSCoR project to develop a comprehensive software environment for the design, development, and operation of small satellites. The result of this project, COSMOS (Comprehensive Open-architecture Solution for Mission Operations Systems) is now available as a set of software libraries, support files, and a basic suite of programs and graphical interface tools. COSMOS is being made available as Open Software under the GNU Lesser General Public License (LGPL).

A major goal of the COSMOS project was to create a system that could be easily adapted to new missions, without the need for extensive reprogramming. To achieve this goal, COSMOS defines all elements of a system as either a “Node”, a “Piece” or a “Device”. These are then tied together in a standardized Name Space, and communicated between elements of the system using JavaScript Object Notation (JSON). All the programs in the system, including the graphical tools, are configured to match a particular mission through a set of text based configuration files, written in either JSON or XML. This approach has proven to be quite flexible, lending itself not only to the operation of the spacecraft itself, but also to the ground stations, and even the Mission Operations Center. Experiments have also begun on applications completely outside of space, such as the operation of computer networks.

The below block diagram shows the general overview of COSMOS functional elements: 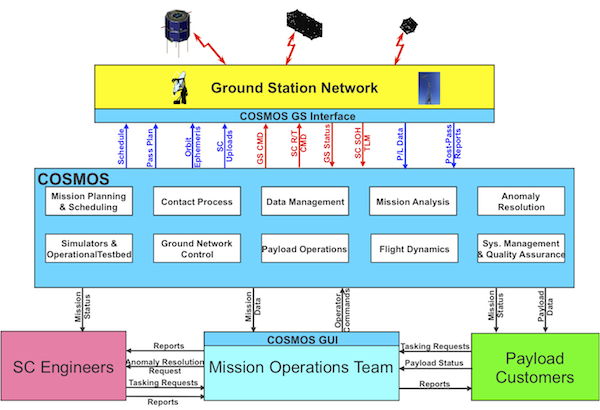 Additional information, documentation, tutorials, and a demo of COSMOS may be found by visiting the COSMOS Project website.