HSFL has acquired a state-of-the-art ADCS Test Facility for testing small satellites. The facility was built by Astro-und Feinwerktechnik Adlershof GmbH (AFW), or Astrofein for short, in Germany and was installed in February 2014 in the HSFL 10,000-class clean room. With the HSFL ADCS Test Facility, a complete end-to-end verification of ADCS systems for small satellite satellites can be executed with great accuracy. The facility permits the execution of complete, dynamic system level testing instead of the typical static Hardware-in-the-Loop (HIL) or Software-in-the-loop (SIL) simulations.

In its current configuration, the ADCS Test Facility is capable of testing small satellites within the range of 50 kg to 100 kg with nominal moments of inertia of 2.5 kg*m2 in the X, Y directions and 4 kg*m2 in the Z direction (changes to the inertia properties can be made to accommodate the design specifications of the satellite being tested). The range of testable inertias is from nominal 2.5 kg*m2 to 30 kg*m2. The interface platform installed on the top of the air bearing is 600 mm x 600 mm with a 100 mm, M4 bolt pattern. The overall dimensions of the test bed (including the coils and sun simulator) are approximately 3110 mm x 3500 mm x 3800 mm. HSFL is currently looking into a new platform configuration that will allow the testing of satellites with less than 2.5 kg*m2, including CubeSats.

The air bearing has a very low disturbance torque, less than 10-5 N*m. The platform is capable of rotating 360° about the vertical axis and approx. 20° in the roll and pitch axis for essentially 3 degrees of freedom (3DoF) rotation capability as experienced in space. Its safety mechanism prevents the air-bearing hemisphere from collapsing in case of a power failure or other unforeseen circumstances. The center of gravity (CoG) of the platform including the ADCS system is calibrated using an integrated linear motor mass system installed on the platform. The platform also has an integrated 24 V DC (unregulated), 400 Wh power source for wireless operation of the system under test. 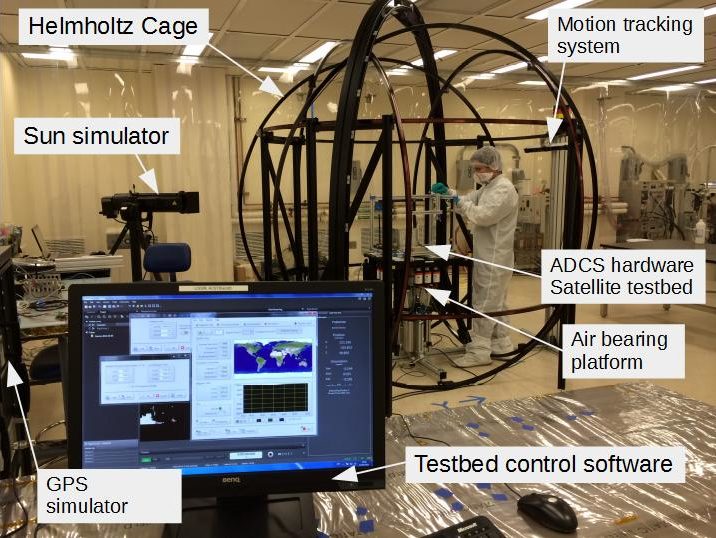 The ADCS Test Facility is remotely controlled by software for calibration and simulation runs:

HSFL developed a software interface with Astrofein such that almost any parameter of the ADCS Test Facility can be controlled using third-party software and more specifically from the Comprehensive Open-architecture Solution for Mission Operations Systems (COSMOS) that has been developed at HSFL. COSMOS is the main software used for HSFL mission operations, ground stations, flight software and simulations.

Another improvement made by HSFL to the ADCS Test Facility is the addition of an Optitrack Motion Capture System using three near-IR cameras. This motion detection system uses IR motion trackers and is capable of determining the absolute attitude of the platform within 0.1º or better in the three axis. The attitude determination accuracy can be improved with the acquisition of more motion capture cameras.

The following are the multiple ADCS Test Facility simulators that are remotely controlled by software:

The ADCS Test Facility accelerates the development and validation of new ADCS hardware and software technologies for actively controlled small satellites including CubeSats. It is not only an ADCS testing platform, but it can also be used as a research and development platform for attitude hardware and software. Examples of interesting activities include testing of new software ideas, failure detection isolation and recovery (FDIR) algorithms and formation flying algorithms in synchronicity with other test beds.